Crypto 101 Blockchain technology Crypto trading Bitstamp tutorials Security People profiles Cryptocurrency guide Crypto definitions Web3
An airdrop happens when crypto assets are distributed to a user’s wallet, either for free or in exchange for performing actions in support of the cryptocurrency project that issued the token. 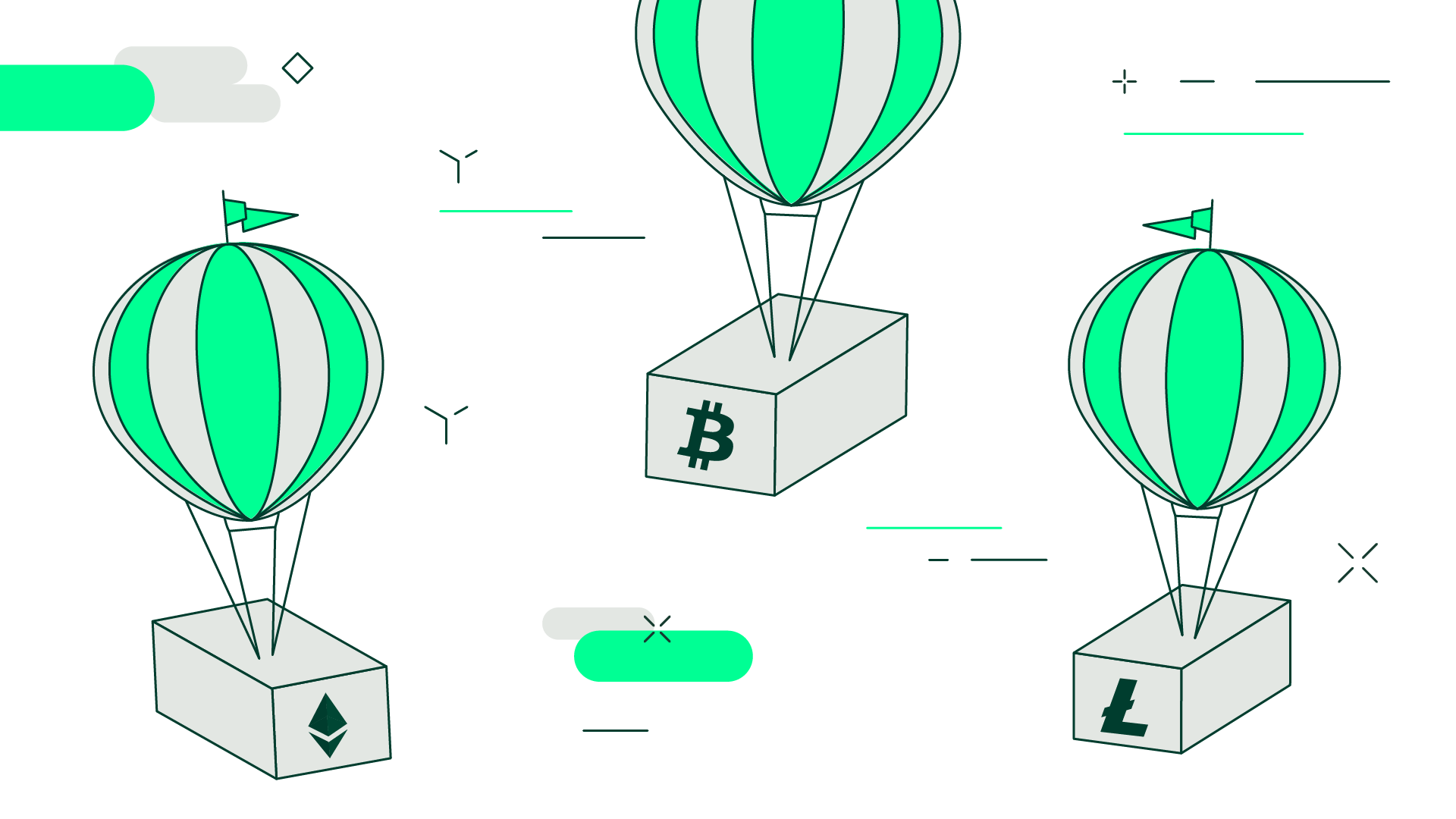 An airdrop distribution can consist of tokens or NFTs. Airdrops are typically used for marketing purposes or to raise awareness and boost engagement, but may also occur for other reasons, such as rewarding users for becoming early adopters of a platform. In some cases, users may participate actively in an airdrop by performing tasks in return for free tokens. In others, they may have tokens deposited in their wallets without any prior knowledge or consent. Hard forks that produce a new coin, like Bitcoin Cash, also result in an airdrop for holders of the original asset.

Airdrops are typically announced via the project website, white paper, or social media.

The concept became popular during the initial coin offering (ICO) boom in 2017-2018, when thousands of new projects launched and founders wanted a way to incentivize users to explore their projects. Some of the most well-known examples from that time include Decred and Ontology, both of which had viral success among the crypto community.

Many projects have since elaborated on the concept of airdrops as part of a broader marketing or token distribution strategy. In 2020, Uniswap sparked a new wave of airdrops among DeFi projects with the surprise distribution of UNI to early adopters of its decentralized exchange.

Airdrops remain popular among projects and users. However, it’s important to understand the various mechanisms used and how to differentiate between opportunities and potential pitfalls.

The rules of any given airdrop are defined by the project, but they generally fall into three types.

A standard airdrop is straightforward – a participant signs up, usually by providing a wallet address, and receives the tokens when the airdrop is initiated. There is often a limit on the number of tokens available, and participants must sign up before a given deadline.

A standard airdrop may also be carried out using a raffle system, where the signup is akin to buying a ticket. When the airdrop is triggered, the winning participants’ wallets are randomly selected.

The first airdrop that ever took place was a standard airdrop of a token called Auroracoin, launched in 2014 as an experimental national coin for the residents of Iceland. People could simply enter their permanent residence ID on the project’s official website to receive their allocation.

Bounty airdrops require participants to carry out tasks that will help promote the project. These could include following the project’s social media accounts, sharing content on social media, signing up for a newsletter, or referring new users to the project. Participants will be asked to provide a wallet address, along with proof they completed the task.

Bounty airdrops are very common, but Ontology is one of the better-known examples. In 2018, it offered free ONT tokens to anyone who signed up for its newsletter to raise interest ahead of the official token launch. Participants received 1000 ONT, worth $2,800 when the token officially launched two months later.

Holder airdrops happen when tokens are distributed to participants who already hold another existing token.

For example, holders of Bitcoin and Ethereum have been awarded an equivalent amount of Bitcoin Cash and Ethereum Classic due to hard forks that saw the original blockchain split in two.

In some cases, projects take advantage of other blockchain networks with a large user base (like Bitcoin and Ethereum) to distribute their tokens. For example, in 2016, when the Stellar network was in its early days, the project allocated 19% of the initial supply of XLM to Bitcoin wallets. In this case, unlike a hard fork, holders of BTC had to claim their XLM allocation via a website.

Exclusive airdrops are only made available to a selected group of participants, usually those who have contributed in some way to the project. One of the most well-known instances occurred in 2020 when Uniswap launched its UNI token and distributed it to any address that had previously interacted with the Uniswap protocol.

Uniswap’s move was so well-received that many other DeFi projects, including dYdX and 1inch protocol, subsequently followed suit by launching their own governance tokens with airdrops to early adopters.

Exclusive airdrops can also be made available to groups other than early adopters. For example, projects in the Cosmos ecosystem frequently offer airdrops to anyone delegating ATOM tokens to secure the Cosmos Hub blockchain.

From the participant’s perspective, the main advantage is fairly obvious – free tokens and the monetary opportunity that follows. For example, Uniswap’s 400 UNI airdrop was worth around $17,000 at its all-time high. However, even if airdropped tokens end up being of relatively low value, airdrops provide a fun way to engage with and learn about different projects and use cases for blockchain.

From the project’s perspective, airdropping tokens is a chance to reach more users that otherwise wouldn’t engage with the project. Some projects also use airdrops to ensure that their tokens are distributed in a decentralized way so no single entity holds enough supply to create instability in the market or in the governance of the project.

One example is Ethereum Name Service (ENS), which followed Uniswap’s example in 2021, distributing governance tokens to existing users as a means of ensuring that voting is decentralized.

Although the idea of free tokens seems benign, users should do plenty of research before engaging with airdrops, to the same extent they would before buying new tokens. Airdrops can often be used by low-quality projects, similar to receiving email spam. In some cases this may be harmless although recipients may find their wallets filling up with low-value token balances.

However, airdrops can be used for more malicious purposes, a practice sometimes known as “airdrop phishing.” Recipients might find an unsolicited allocation of “locked” tokens in their wallets and discover that they’re being asked to buy more tokens, hand over their private keys, or connect their wallet to a third-party website where it risks being drained of funds.

Blockchains are public infrastructures and there is little anyone can do to block unwanted airdrops. Security experts frequently advise crypto wallet holders to always be wary if they receive a deposit of unsolicited tokens from an unknown project or receive messages on social media about free airdrops. Additionally, security best practices for crypto include never sharing private keys with anyone.

It’s also worth noting that airdrops may be reportable for tax purposes depending on the jurisdiction. For instance, crypto airdrops are treated as income in the United States.