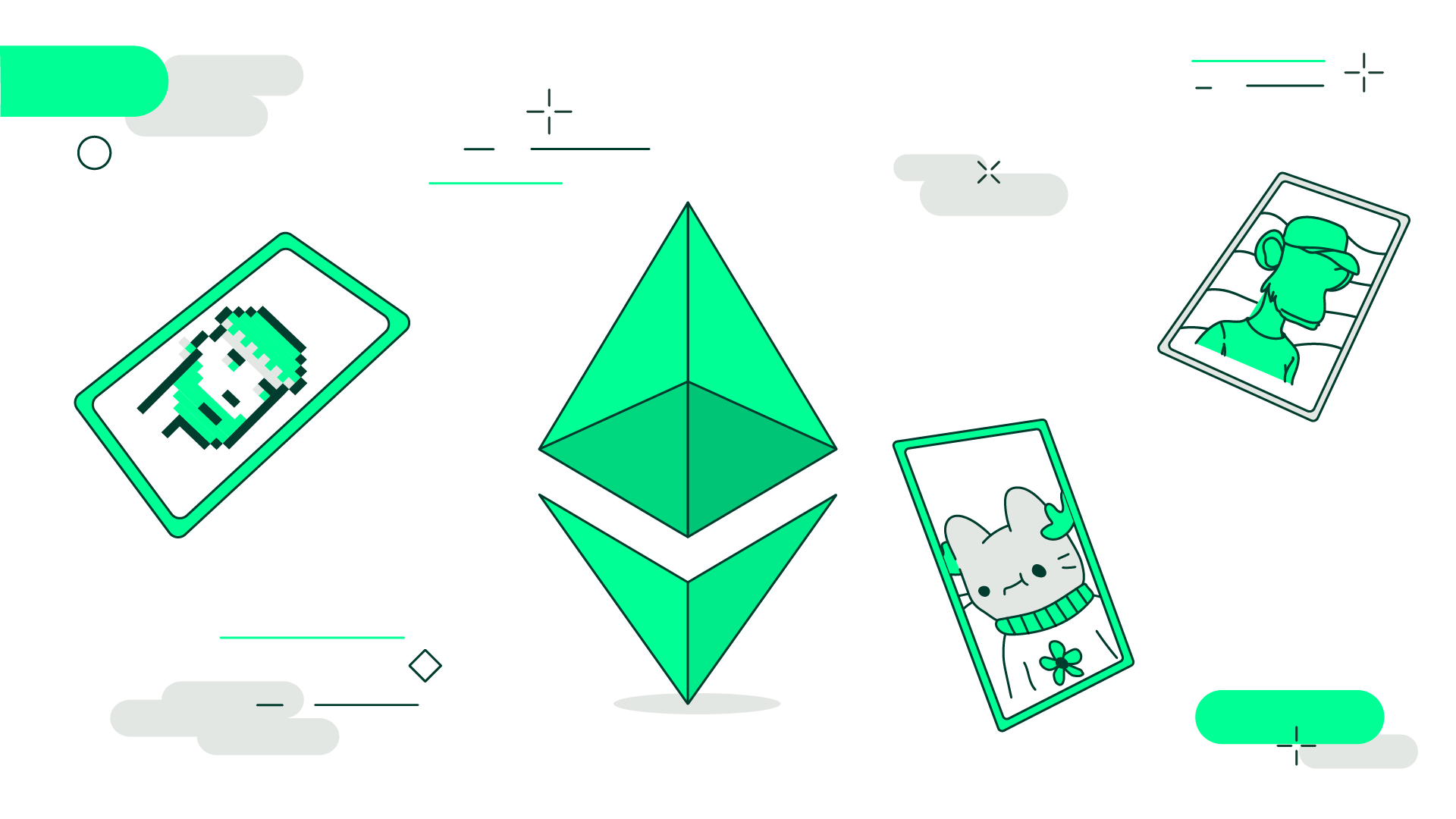 One of the characteristics of currencies is fungibility, where each individual unit must be valued the same as—and interchangeable for—another unit. For instance, if you give your friend a 0.1 BTC from your wallet, and they give you a 0.1 BTC from theirs, no meaningful change in value has occurred.  NFTs, however, are blockchain-based assets (or, tokens) that are non-fungible, meaning they are one-of-a-kind.

Although NFTs were created and popularized on Ethereum, the first NFT concepts were built on Bitcoin. These were called “colored coins,” and they applied digital watermarks to coins that could be used to track off-chain assets (like gold).

Further, a platform called Counterparty was developed so people could create unique, Bitcoin-based tokens that could be used in blockchain-based gaming applications. The first of these games, Spells of Genesis, featured a deck-building game (a game where the main goal is to construct a deck of cards) and saw its first virtual “card” tokenized in March 2015.

By building protocols to create one-of-a-kind assets on top of Bitcoin, early developers provided the groundwork for what would soon be known as NFTs. In June 2017, the CryptoPunks NFTs were created on the Ethereum blockchain. CryptoPunks is an NFT collection of 10,000 unique 24×24-pixel, 8-bit-style avatars, and is one the first and most popular collection of unique digital characters.

The CryptoPunks smart contract generated 10,000 Punk NFTs that were minted by crypto users over the course of 8 days—for free, plus gas fees. CryptoPunks introduced the concept of the profile picture (PFP) format for NFTs, displaying images that could be used for identification in an online profile. The PFP format, along with the 10,000 NFTs in the collection, became conventions for future NFT creators, and they were mimicked by many subsequent projects like the Bored Ape Yacht Club.

The story of the CryptoPunks didn’t begin with blockchain. The co-creators had previously developed a pixelated character generator, but they didn’t have an application for it until they discovered Ethereum. Inspired by the possibilities of using blockchain technology to verify digital ownership, they developed the project into an experiment in how art could be represented virtually.

Since there wasn’t an established way to represent NFTs on Ethereum at the time, the CryptoPunks were created with the ERC-20 token standard (the same one used by other Ethereum cryptocurrencies like SAND and MKR).

An official, Ethereum-wide standard for non-fungible tokens didn’t exist until after CryptoPunks was created. Four developers introduced the design for a new token standard called ERC-721 in September 2017, and it was ultimately accepted by the Ethereum community in June 2018.

ERC-721 laid out basic rules for NFTs which included unique token identifiers, a safe way to transfer these digital assets, and how to include additional data (like image and video files) with tokens.

One of ERC-721’s developers, Dieter Shirley, also co-created another famous NFT project called CryptoKitties, a blockchain-based game that combines the appeal of collectible culture with a mechanism that generates new cat-themed NFTs for its players, referred to as “breeding,” a nod to the way real-life cats procreate. CryptoKitties used a beta version of ERC-721 before it was formally implemented as an Ethereum token standard.

NFTs have evolved considerably since the early successes of CryptoPunks and CryptoKitties. On the heels of ERC-721, the ERC-1155 token standard was introduced, granting even more functionality to NFTs and establishing a basis for semi-fungible tokens. These assets can display characteristics of both fungible and non-fungible tokens, all controlled using the same smart contract. This token standard has proved especially useful in blockchain-based games, where duplicating resources (like skins and weapons) is needed.

During the meteoric rise of NFTs, countless PFP projects have launched and matured into thriving—if volatile—markets. Games using NFTs have become so popular that they have needed to move to layer 2 blockchains and/or dedicated sidechains. Digital art NFTs have sold for millions of dollars. However, none of this would have been possible without the solid foundation set by the early developers of Ethereum’s non-fungible tokens.

Examples of NFTs on Ethereum

Despite its early introduction, CryptoPunks remains one of the most popular NFT projects to this day. In fact, some of the largest NFT sales to date have been Punks. However, other top projects offer a well-rounded overview of the NFT landscape.